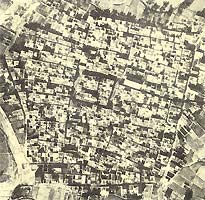 The houses of Kalamoti show a different architecture compared to the ones of the other villages of Chios. The house consists of 2 levels, a basement, called "katoi", and a first floor, called "anoi" and there is a separate place for the animals.

The basement is used for kitchen or dinning room, the holding of many occupation of agricultural life. The continuous room is used as a cellar.

Sometimes, the arch of the stairs is left open on the side, in order to be used for sleeping. Most of the times, a wooden separator is been put and it is used as a cellar. Often, an attic is made of wooden boards, used as a cellar or a place for sleeping. The "pass" is above the stairs. The living room is called "Good House" and the bedroom "Menio". We can reach the chamber through a very small door from the stairs.

In Kalamoti and Pyrgi, a middle wall is often used to isolate the entrance and the stairs of the first floor to the basement and a separate entrance door is constructed. In that way, two different houses can be accomplished.